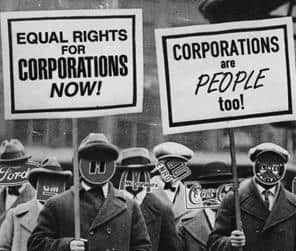 Examining the effects of Citizen’s United

In January 2009, the U.S. Supreme Court decided Citizens United v. Federal Election Commission. The case did not expressly designate corporations as individuals as is often reported. Corporations became “people” legally in 1886 as the result of a clerical error – see Thom Hartmann, “Unequal Protection: How Corporations Became ‘People’” (2010). The case also did not address the issue of donor identity. It does not require or prohibit disclosure of donor identity.

But Citizens United is a landmark decision that vastly alters political campaigns and financing. The judgment has resulted in the massive influx of anonymous money into federal campaigns and, more than ever, makes politics a battle of the wealthy.

The highly-publicized case came about as the result of a non-profit corporation called Citizens United seeking to air a TV film it had made about Hillary Clinton. The group hit an obstacle when they tried to purchase airtime to run the film.

Section 203 of the 2002 Bipartisan Campaign Reform Act (McCain-Feingold) prohibited corporations and unions from using general treasury money to fund TV campaign ads. Citizens United challenged the law on the basis that their movie could not be considered a TV ad.

The Court ruled 5-4 in favor of Citizens United stating that no distinction can be drawn between the First Amendment rights of individuals and corporations in the context of elections. The Court also said that “independent expenditures, including those made by corporations, do not give rise to corruption or the appearance of corruption.”

Super political action committees, or Super PACs, became the vehicle for the enormous influx of money into political campaigns. Citizens United did not create Super PACs but it set the groundwork stating that political spending only leads to corruption if it is “directly coordinated” with a candidate’s campaign. The result: many already-existing political committees declared “independence” from their candidates and became Super PACs — and the money flooded in. But even this vague condition of non-direct coordination between corporate expenditures and campaigns was eliminated in 2011 by the Federal Election Commission (FEC) when it voted to allow politicians to coordinate directly with Super PACs.

At the time of the ruling, 24 states had laws prohibiting or limiting independent expenditures to campaigns by unions or corporations. This summer, the best challenge to Citizens United went to the Supreme Court and lost. The Montana Supreme Court upheld the Montana Corrupt Practices Act of 1912 that prohibited expenditures by corporations to influence political campaigns. The law was created to counter early 20th century copper barons’ efforts to control the political system in Montana. In June, the Supreme Court struck down the law stating that “there can be no serious doubt” that the Citizens United ruling applies to the Montana state law.

We now live in the era where the super-wealthy are able to anonymously provide their preferred candidate with vast sums of money.

But the problem is not only the money, it’s the secrecy. The ruling opened the corporate money floodgates. But it also revealed a disturbing level of cowardice among the nation’s wealthy. The backlash must include measures to insure compelled public disclosure of the identities of anyone who spends money to affect an election.

The Federal Elections Commission can make this happen. But it will not happen without public pressure. Citizens can demand disclosure requirements now. Post your comments on the FEC website contact page at www.fec.gov.

Tell your elected officials that you want to know who donates money to candidates.

Charlene LaVoie is the community lawyer in Winsted. Her office is funded by the Shafeek Nader Trust for the Community Interest. Intern Sam Reynolds of Canton, a junior at Wake Forest University in North Carolina, contributed to this article.