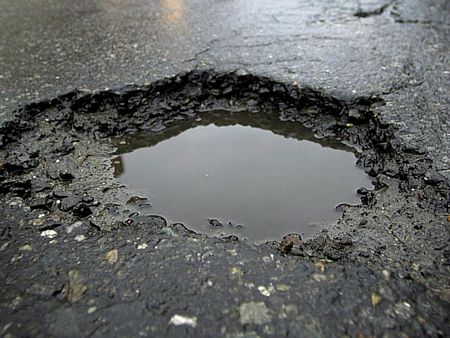 More trickery from appointed Mayor Marsha Sterling that piggybacks on citizen concerns about repairing the town.

In 2013, the budget focused on infrastructure and passed because the director of Public Works, a professional engineer, did something that had never been done. He made a public presentation about the state of town infrastructure. It was a sobering review of decades of neglect: Workforce reductions, insignificant preventive maintenance, serious deterioration of roads, three bridges, drainage and catch basins, sidewalks and pedestrian bridges, town buildings and equipment. The overall grade for Winsted infrastructure was poor.

The director’s prescription was to stop the band-aid approach to maintenance and to start a preventive maintenance routine for the roads in decent shape, improve the condition of infrastructure so less time and money is spent on potholes, modernize equipment to increase productivity and reduce costly repairs, and an aggressive bonding program to finance repairs since we could not budget enough annually.

After the director made his report, then-resident Marsha Sterling snidely commented publicly that the report was just his “wish list.”

Looking around our town, we should all question Sterling’s characterization.

Ralph Nader called for a citizen effort to call attention to the problem. Citizens rallied and formed the Emergency Citizens Committee to Repair Our Town to spread the word. The Democratic selectmen responded and fashioned a budget to rebuild the fund balance so that Winsted could borrow for the major work required to fix our town.

Why does the fund balance matter? Municipal financing recommends a percentage of the annual budget be put in reserve, like a savings account, for emergencies and to maintain a credit rating in order to borrow money. Every municipality borrows for large projects. Borrowing money is a basic finance tool that most of us use in our own lives.

From 2007 to 2009, the Republicans took money from the fund balance and put it into the budget so they didn’t have to raise taxes to keep up with expenses. This jeopardized the town. When the 25-year Henry Centrella scheme was uncovered by the Democratic majority in 2012, the empty fund balance, along with the theft of at least $2.5 million resulted in the cancellation of the town’s credit rating and the ability to borrow.

The 2013 Democratic budget began to restore the fund balance and budgeted a modest amount of money for road maintenance.

In 2014, aware that people were concerned about infrastructure, Sterling pulled a fast one. She pretended to put money into road repairs. She did not add money to the fund balance, and she actually took money from the fund balance and put it into the selectmen’s slush fund. The anti-government crowd co-opted the 2013 pro public works strategy, supported the corrupted 2014 budget, and it passed.

Where does this leave us? With less in the fund balance than last year and back at square one in terms of getting to the point where we can borrow to fix this town. Talk about a step backward.