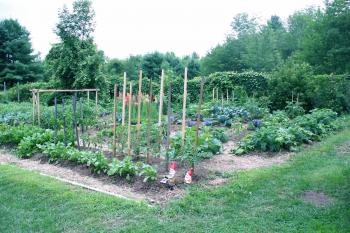 The Winsted community garden on Wallens Hill is a special place for green-thumbed residents. Photo by Anita Garnett

Special to The Winsted Journal

WINSTED — Above the buzz of Main Street at the top of Wallens Hill lies a hidden Winsted gem. The Wallens Hill Town Garden is beautiful: blooming with fresh vegetables, bustling with dedicated gardeners and uplifting, as a breeding ground for community participation.

The garden boasts 24 plots, each 24 by 33 feet, and seven registered gardeners. Originally, there were nine people signed up for plots this year (typically a person has at least two), but a hot and wet summer proved daunting for some. The gardeners endured the early season floods, which require many to plant again. They did.

Ron Banks, a Public Works employee for 23 years, made many improvements to the town garden including the most recent: a water barrel filled at the beginning of the season by the fire department that delivers water through an irrigation system to the garden plots. The barrel has an open top and also collects rainwater. Ingenuity is evident throughout the garden. A compost pile sits outside the garden, made from leaves of Winsted residents. Ron also brings the town’s tractor and tiller up at the beginning of the season and tills everyone’s garden before they plant. Ron, along with most of the other gardeners, did not come to the plots with much expertise. He has been reading books on the subject for years and shares his knowledge with the other gardeners.

Another gardener, John Charity, teases Ron about whose tomato plants are taller. John is retired and tends his garden every day. He loves the fresh vegetables, “They really are better for you,” though he also boasts that he trades his extras for baked goods from women in his neighborhood. John, like Ron, has contributed much to the garden over the years. Two years ago he mentioned to Tobias Calzarette, a Boy Scout, that the garden needed a tool shed. Tobias adopted this as his Eagle Scout project — fundraising and attending town meetings in order to waive taxes on the shed. In the end, Tobias built a shed and also donated a rototiller and lawn mower. The shed holds all of the gardeners’ tools, which they share amongst themselves.

Bobby and Martin Bulger were also at the garden, harvesting some of their lettuce. Bobby heard about the garden two years ago from a woman she met on her morning walks. Now she boasts that, because of the garden, “We eat a lot more vegetables, that’s for sure.”

Other members of the garden include Pat Sullivan, Steve and Sarah Polek, Patrick Sullivan, Mary and John Pollack and Richard Martin, who has been at the garden longest — 14 years. The garden itself has existed in this form for over 60 years.

Though the garden is bustling this summer, it boasts even more potential. Beyond the garden’s fence, currently wrapped in sprawling concord grape vines, lies land enough to double the number of plots, or more. And the gardeners are more than willing to share their space and “bountiful harvests” with new, interested residents. “It’s a learning experience,” says Bobby Martin. As far as this garden is concerned, the more people the better.

For those interested, garden plots are reserved at the start of the spring by calling Winsted Public Works Department at 860-379-4070.

Sage Hahn is a resident of Colebrook and an intern for the Office of the Community Lawyer. She has worked for the office for four years. She is a junior at Brandeis University studying creative writing and women and gender studies.