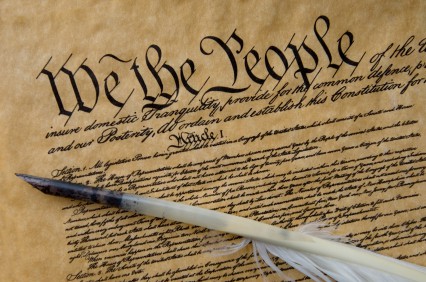 Constitution Day marks the birthday of our government

On Sept. 17, 1787, the delegates to the Constitutional Convention met for the last time to sign the document they had created. Constitution Day commemorates the formation and signing of the U.S. Constitution by 39 men, representing the colonies.

These “brothers” combined the ideals of the Declaration of Independence with the Articles of Confederation, tempered by experience, to create the practical workings of the United States government.

Under the first constitution, the Articles of Confederation, the new government conducted the affairs of the country during the last two years of the Revolutionary War and produced two significant laws: the Land Ordinance of 1785 and the Northwest Ordinance of 1787.

Its primary activity was to control foreign-policy and conclude treaties such as the Treaty of Paris in 1783. But it was a limited document. It gave no power of national taxation (economic credibility was a problem for the young national government), no power to control trade, and it had a weak executive (in 1781, John Hanson served his one-year term as the first president under the Articles of Confederation).

State sovereignty was supreme. Each state had the power to collect taxes, issue currency and provide for its own militia.

The founding Brothers quickly learned the limitations of the Articles of Confederation and created a national government intended to divide control of the government between the states and the central government, rejecting the notion of a unitary government in which all power would be in the hands of one central authority.

Articles 1, 2 and 3 of the United States Constitution set forth the three branches of the federal government. These are the legislature/congress (Article 1), the executive/president (Article 2) and the judiciary/courts (Article 3).

Article 1 is much longer than both Articles 2 and 3 combined and about one-third the length of the entire Constitution. This reveals how important the founding Brothers believed the Legislature to be to the life of a Republic.

The First Amendment deals with religion and expression. The Second Amendment deals with the right to bear arms. The Fourth, Fifth, Sixth and Eighth Amendments pertain to the criminal justice system. The Third, quartering of soldiers; Seventh, right to trial by jury in civil matters; and Ninth, rights retained by the people. The important 10th Amendment reserves to the states any power that is not specifically given to the federal government or specifically denied to the states.

With a total of 27 amendments, only 17 have been enacted since 1791. Three of these dealt with the end of slavery, one gave women the right to vote, and two of them concerned society’s relationship with alcoholic beverages (prohibition and repeal of prohibition). This is some indication the gravity in which our society considers amending the Constitution over the past 220 years.

The two signers from Connecticut were Roger Sherman and William Samuel Johnson.

Sherman was a lawyer and served on the Committee of Five that drafted the Declaration of Independence. He was also the first mayor of New Haven and was a representative and senator in the new republic. Sherman was one of only two people to sign all four great state documents: the Articles of Association, the Declaration of Independence, the Articles of Confederation and the Constitution.

Johnson was a statesman who served in the Senate and as president of Columbia University.

There are many books about the Constitution and its authors. One of my favorites is “Founding Brothers,” by Joseph J. Ellis. Using six fascinating episodes, Ellis explores how a group of gifted but flawed individuals — Hamilton, Burr, Jefferson, Franklin, Washington, Adams and Madison — confronted the challenges of creating a nation.

Ellis analyzes Hamilton and Burr’s deadly duel, Washington’s precedent-setting Farewell Address, Adams’ administration and political partnership with Abigail, the debate over where to place the capital, Franklin’s attempt to force Congress to confront the issue of slavery and Madison’s attempts to block him, and Jefferson and Adams’ famous correspondence.

So, happy birthday to the most civilizing document of human history, which continues to remind us of the grandeur of this human experiment and the remarkable prescience of the Founders and others who made it happen, against all odds.